Donna Carlton established International Dance Discovery in 1987, selling dance accoutrement. She began teaching group classes at Lynda Mitchell Yoga Studio in 1989. She published the “Middle Eastern Dance Video Sourcebook” annually from 1989-2005. In 1995, she published her book, “Looking for Little Egypt,” about the history and perceptions of Middle Eastern Dance in this country (available at www.lulu.com )

She began sponsoring workshops in 1989, with instructors such as Karen Custer Thurston and topics such as Greek folkdances. For several years, she organized and sponsored workshops twice a year with luminaries such as Aida al Adawi, Elena Lentini and Samara Adell. In addition she leads workshops on various specialty topics. Donna is the first person to teach Middle Eastern Dance for college credit in the state of Indiana. She teaches extracurricular classes for the community at Enlighten Wellness and also at Indiana University through the School of Public Health-Kinesiology Department (a one credit course). 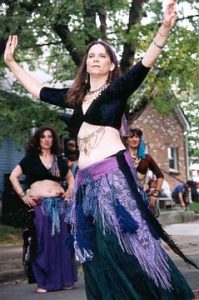